As the COP26 summit takes place in Glasgow, Australia has announced its long-awaited commitment to achieve a goal of net zero emissions by 2050, amid mounting public pressure nationally and internationally, but it does not appear. sufficiently convincing.

As a notable emitter per capita, Australia is widely seen as a laggard in the fight against global warming. Australia has also long been criticized for refusing to set detailed carbon neutrality targets, as one of the world’s largest exporters of coal and liquefied natural gas.

Experts have pointed out that Australia’s climate change performance runs counter to its net zero target, particularly Australia’s current dependence on coal. Experts called on Australian Prime Minister Scott Morrison to stop passing the buck and slamming China, whose per-person emissions are only about half of Australia’s, and to better seek possible collaboration with China .

Morrison announced a much delayed climate plan just days before the COP26 summit, saying he would meet the goal of net zero carbon emissions by 2050 thanks to the ongoing 2030 target of reducing emissions by 26 at 28% compared to 2005 levels.

The announcement took months of political wrangling, the BBC reported, but nothing new to the target set under former Prime Minister Tony Abbott in 2016.

Australia, the world’s largest exporter of coal and fossil fuels, has drawn strong criticism for a far modest commitment than the ambitions of other rich countries, with nothing more up-to-date than the target announced at the Paris conference on the climate in 2015.

As one of the largest emissions per capita, it has long dragged its feet on climate action, despite having experienced a direct influence on its own territory, such as prolonged bushfires, heat waves seas, sea level rise in Australia and more frequent floods and droughts. .

Its commitment has been accused of being the weakest at COP26 among developed G20 countries, while others, including the UK and the EU, have stepped up their greenhouse gas emissions reduction targets. greenhouse heading towards a 50% reduction from 2005 levels. 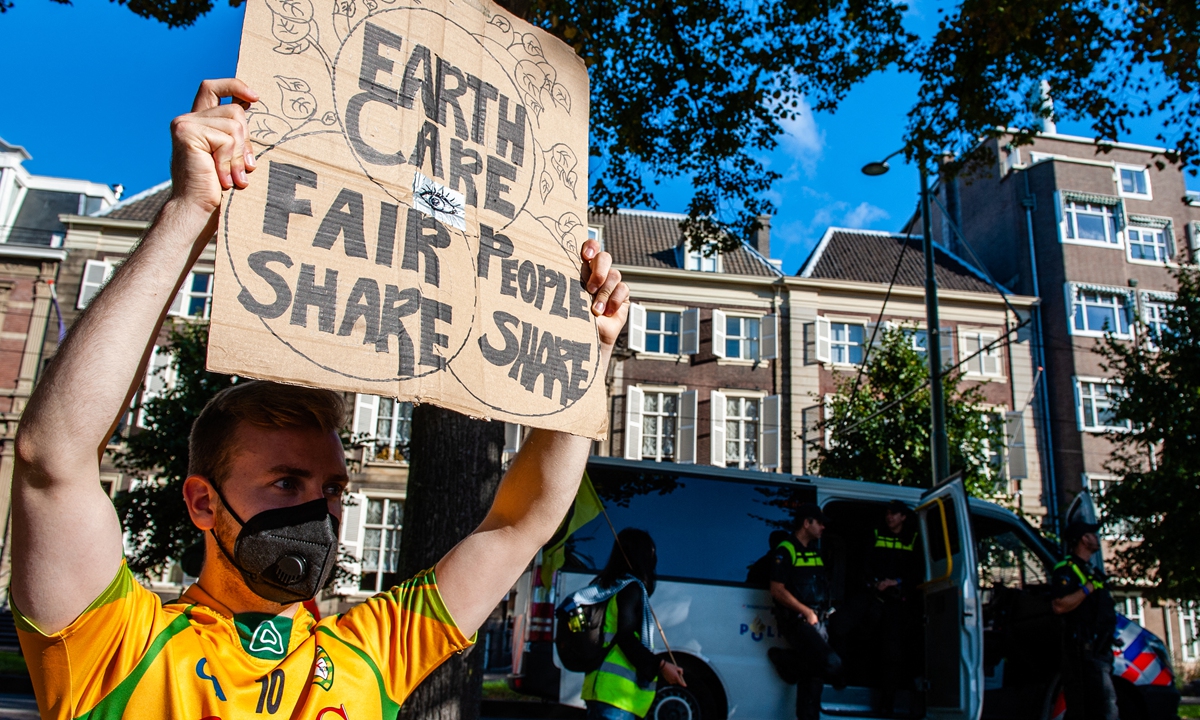 Climate activists hold placards during a protest against Australia’s energy policy outside the Australian Embassy in Berlin on January 10, 2020. Photo: AFP

Public anger abroad and at home

The Australian government’s inaction on climate change has long been a source of concern and criticism. Media reported on a batch of Torres Strait Islanders living on Australia’s north coast who filed a lawsuit against the government on the day the carbon emissions target was announced, for leaving residents at risk of flooding and soil salinization as a result of global warming.

Australia has already experienced 1.4 ° C warming – well above the global average of 1.1 ° C – which could lead to more intense and frequent fires and other extreme weather fronts. And that will continue to increase, with serious impacts if action is not taken to reduce carbon emissions, according to the Intergovernmental Panel on Climate Change (IPCC) in 2021.

Bandt called on Morrison to double or triple the country’s targets for 2030, saying that “any reduction in emissions of less than 75% by 2030 means abandoning the 1.5 degree target of the Paris Agreement.”

Data released by researchers at Monash University shows Australians are almost three times more concerned about climate change than COVID-19, with many showing signs of PTSD due to past or future climate-related catastrophic events.

On August 10, a group of protesters sprayed the “climate duty vigilance” message on concrete outside the Australian Parliament and on a fence outside The Lodge before being arrested.

“Australians are very concerned about the impact of climate change on Australia. Polls show that around 80% of Australians are very worried. We are already seeing the impact of extreme weather conditions and we know it is just the start, “Rhonda Garad, senior lecturer and researcher at the Monash Center for Health Research and Implementation, told the Global Times Tuesday.

“Australia needs to do a lot better. We need to reduce our emissions by 80% by 2030 to prevent global warming above 1.5,” Garad said. “Morrison must take the advice of scientists and take strong climate action. “ 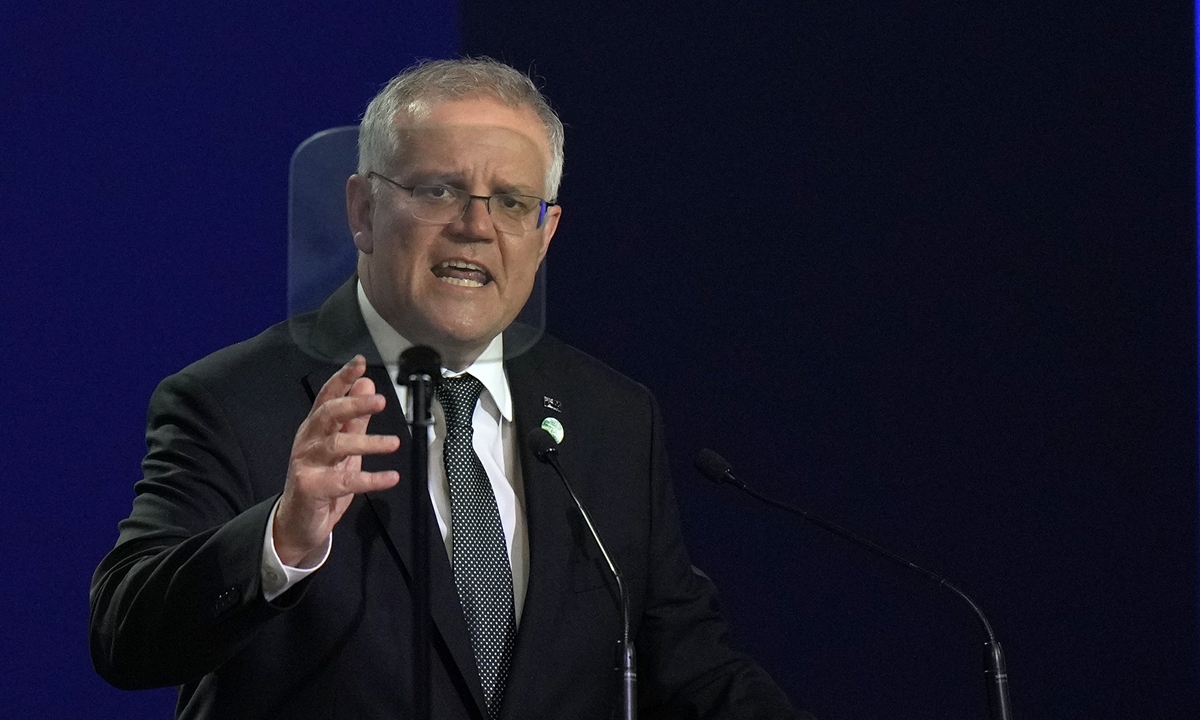 Matthew Agarwala, an environmental economist at the University of Cambridge, revealed that Australians emit 3.37 times more CO2 per capita than the average global citizen, a number that rises to 4.15 when including gases at more potent greenhouse effect such as methane.

Partly because of her government’s inaction, Australia was ranked last for climate action out of 193 countries in a UN report in July on assessing efforts towards global development goals sustainable.

But Morrison apparently never gave up on seeking excuses.

As leading scientists call on the world to avoid impending climate catastrophe, Morrison responded by saying: “There is no direct correlation between the measures taken by Australia and the temperature in Australia,” reported the Guardian.

“It’s like an ill-bred student in the Paris Agreement class, having neither credibility nor good reputation with his ‘comrades’,” commented Chai Qimin, director of the Strategy and Planning department at the National Center for the strategy and the international on climate change. Cooperation.

The obstacles to cutting Australia’s emissions come mainly from the country’s heavily polluting pillar industries, including steel, iron and coal mining, Chai said. “The reduction in CO2 emissions harms the interests of Australia’s national giants in these industries,” he told the Global Times.

Faced with resistance from these interest groups, Australian administrations from former Kevin Rudd to current Scott Morrison have made little difference in reducing emissions, observers say.

The National Party of Australia, which is part of Australia’s ruling Liberal-National coalition, actually represents farmers, ranchers and miners, said Chen Hong, professor and director of the Australian Studies Center. East China Normal University. “This leads to the very conservative attitude of the Morrison government [toward climate action], “he noted.

Additionally, within the Australian government there are climate skeptics who do not believe humans are causing global warming, Chen told the Global Times. He mentioned former Prime Minister Tony Abbott, a climate skeptic who is also infamous for his interference in China’s internal affairs on the Taiwan issue. “It’s anti-intellectual,” Chen said.

Worse yet, the Australian government has frequently singled out China on emissions reduction issues, turning a blind eye to the fact that China’s per capita emissions (around 8.12 tonnes) are much lower than those of China. Australia (15.2 tonnes), observers noted.

In his brazen defense, Morrison has shifted the blame onto developing countries, but he remains absent in funding support for global actions on climate change, as he has stopped contributing to the United Nations Green Climate Fund and continues to finance the fossil fuel industry.

“This new blame story is grim and cruel,” said an article on Australia’s Renew Economy website in August. “It’s another sinister effort for leaders to shed all responsibility.”

China’s draft of the 14th five-year plan (2021-2025) for national economic and social development and long-term goals through 2035 actually set a binding target to reduce carbon intensity by 18% by 2020. to 2025, and applauded by many countries for its clear stage goal.

The Morrison administration has played the climate change card to attack China, Chen said. “By arming the climate subject, he is trying to push China towards unrealistic and irrational targets,” he told the Global Times.

To get out of a national climate dilemma and regain confidence and reputation, experts stressed that Australia should make up its mind to reduce its dependence on energy-intensive raw materials industries.

“In addition to making promises to the international community, it must strive to make and implement [industrial transforming] related policies, ”noted Chai.

Strengthening international cooperation and making joint efforts to tackle climate change has become a global consensus. China and Australia, the world’s two major economies, have enormous scope for collaboration in this regard, climate experts from both countries told the Global Times.

China and Australia can define common agendas, such as coming together to help Pacific island countries cope with climate challenges, Chen suggested.

Australia is advancing technologies such as CCUS (carbon capture, use and storage) eg Chai. “It can cooperate with China in the joint development and deployment of emission reduction technologies,” he said. “It will be a good thing for both.”

“Australia and China are citizens of the world and both can significantly reduce emissions,” Garad said. “Collaboration is much better to protect the planet. ”

Why France and UK get so angry